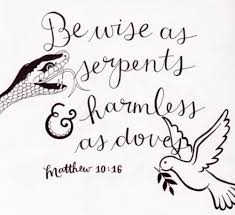 Jesus sends His own into the world to proclaim that the Kingdom of Heaven is at hand (Matthew 10:7). He sends them out as sheep in the midst of wolves (10:16).  Paul, citing Psalm 44:22 states, “For your sake we are being killed all the day long; we are regarded as sheep to be slaughtered” (Romans 8:36).  From the moment the Kingdom was initially announced as the forerunner of the King made His coming known (i.e. the ministry of John the Baptist), “the kingdom of heaven has suffered violence” (Matthew 11:12).

Christians of all ages have known that their faith may cost them their life.  Martyrdom has always (sometimes in very unhealthy ways) been viewed as a noble end for the faithful follower of Jesus.  Early church father, Tertullian, is often quoted as saying, “the blood of the martyrs is the seed of the church.”  Whether this statements is able to hold up to the weight often placed upon it (and it would be hard pressed to do so), or not, it does manifest the reality that many, many Christians were dying for their faith and that it was considered a noble end.

In Luke 16, Jesus tells a parable of an unrighteous steward.  This man was wasting the possessions of his master and was about to get fired.  Before his boss can send him to the unemployment line (figuratively speaking, of course), he makes some very shrewd and calculated decisions for his own benefit. While he still possess the authority to do so, he goes and bargains with each of his master’s debtors and lets them pay off their bills at a cut rate.  The unrighteous steward is praised by his master for his shrewdness.  Jesus then comments, “For the sons of this world are more shrewd than the sons of light” (Luke 16:8).  This is a clear rebuke to the lack of cunning and shrewdness employed by the sons of light.

We are to be relentless in our testimony to Christ, His Kingdom and His grace.  We must be willing to face hardship and despair … and yes even death.  But we must also beware of people, be cunning and act shrewdly for the sake of the Gospel. We need to leverage situations for Christ’s glory, scheme plans for His Kingdom and employ every opportunity and benefit allotted to you for His sake.  And yes, we should seek to preserve our life so that we can continue to make Christ known.

When we put all of this together we see that, as followers of Christ, we need to testify fearlessly to Christ and be relentlessly calculated for the sake of His Kingdom. Beware of the fact that there will always be those who love darkness rather than light and who stand opposed to the Lord and His Christ.  But be equally aware that Jesus has overcome and that “[God] always leads us in triumph in Christ and manifests through us the sweet aroma of the knowledge of Him in every place” (2 Corinthians 2:14).

Let me encourage every Christian to sit down and think about how you can be more calculated for Christ and His Kingdom.  What can you leverage for the Kingdom?  What plans can you put into order so that you will have more opportunities to make Him known? What relationships can you lovingly exploit for the sake of the fame of God’s great name?  Of course, we never want to be shrewd in any way that would undermine the Christians virtue of love, but we must, likewise, not shy away from being relentlessly calculated for Christ.