It Hurts Not to Get Angry 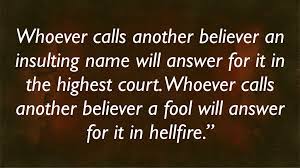 It Hurts Not to Get Angry

Jesus tells us in the Sermon on the Mount that we should not get angry.  “You have heard that the ancients were told, ‘You shall not commit murder’ and ‘Whoever commits murder shall be liable to the court.’ But I say to you that everyone who is angry with his brother shall be guilty before the court; and whoever says to his brother, ‘You good-for-nothing,’ shall be guilty before the supreme court; and whoever says, ‘You fool,’ shall be guilty enough to go into the fiery hell” (Matthew 5:21-22).

There are a couple ways that we can respond to the injustices which happen to us in this broken world.  One way is natural, the other is not.  The natural way of responding to injustices committed against us is to become angry. We inherently know that injustice is wrong and when it is perpetrated against us we naturally desire retribution. This desire for retribution, for the same kind of pain and assault to be inflicted on those who have inflicted us is anger. We have all experienced it; we all know—far too well—this feeling.  However, Jesus calls us to a different response … He calls to respond in a way which promotes the truth of the Gospel.

We are not to get angry. Jesus, when wronged by all of us—sin is, after all, wronging God—did not get angry.  He did not come seeking to deal out the retribution which our sin should have rightly brought upon us.  Rather, Jesus came and bore our sin, took our guilt and suffered our punishment. In doing this our Savior suffered … He hurt.  The sin and brokenness of this world could not leave Him untouched.  Justice is good and injustice is beyond bad.  But if He was not going to be angry and come dealing out fiery retribution, He must hurt and hurt deeply.  He must take upon Himself our sin and our pain, He must bear the weight of justice on our behalf.

To not get angry will hurt … often times deeply.  But as we hurt in the place of becoming angry, we testify to Him who has borne the injustice this world and who has hurt for us, rather than seek our destruction. Jesus bore our injustice and hurt because of our sin … He died in our place.  But death could not hold Him and injustice, hurt and pain would not have the final word.  The wages of sin is death (Romans 6:23), but Christ had lived a perfect and, thus, indestructible life (Hebrews 4:15, 7:16).  Jesus bears our sin and He hurts, but this hurt and death make the way for resurrection life.

As we hurt in the place of anger, we testify to Him who has hurt for us and whose hurt leads to the cessation of all hurt, whose death leads to resurrection life.  So, yes … it hurts not to get angry, but it calls attention to the fact that there has come One who has conquered injustice and who will ultimately usher in the reign of perfect righteousness and peace.  May our lack of anger lead others to see the beauty of Him who has come to take away all injustice and who will come against to usher in the age of perfect righteousness and peace, where every tear will be wiped away and hurt will be a thing of the past.  May we truly testify to the glory of Christ in the lives we live.

[1]I am distinguishing between retribution and proper civil action when it is so mandated by law.  Civil action, however, should not be understood or pursued out of anger and retribution, but as a means of love for all our neighbors.  The civil government is established by God for upholding of what is good and the deterring of what is evil.  To pursue civil action is to pursue the good of society.  But it must be done with the absence of anger if it is to be done in a truly Christian manner.